There are nowadays digital tools to colorize old, black-and-white photographs of arbitrary age. They are swift, they produce impressive, realistic results, they are free to use. This post will try to convince you that you should resist the temptation and not run your valuable family photos through those tools.

So, of course, let’s start with a photo. 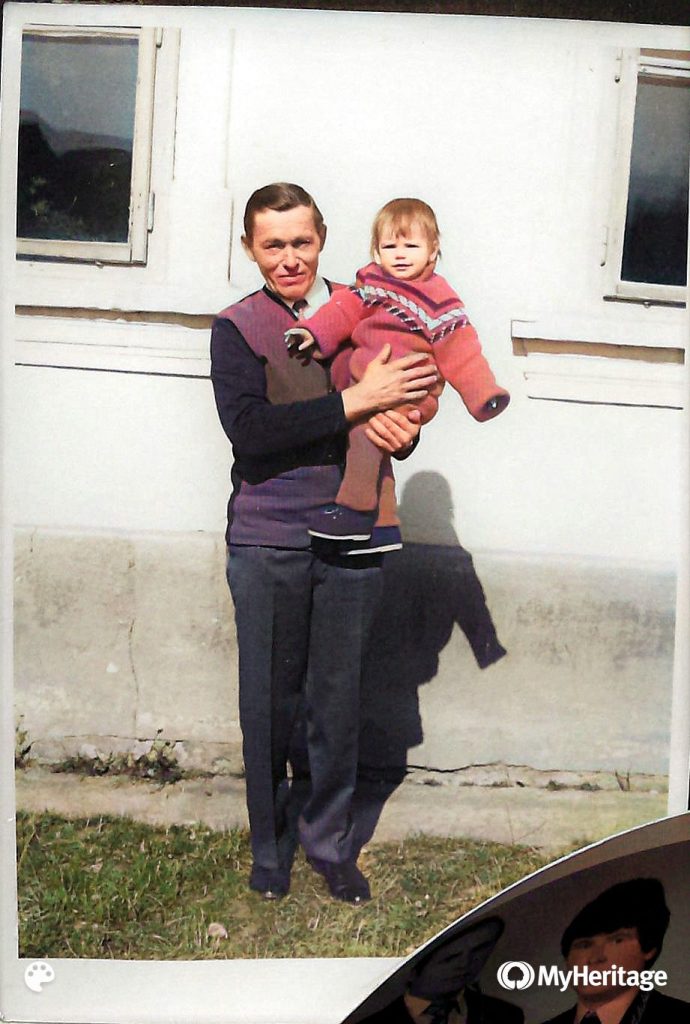 This color photograph from about 1970 is very dear to me. It pictures my grandfather holding a child (who is only distantly related to me). I never met my grandfather, as he died in 1974 and I was only born 14 years later. This is one of two existing pictures of him in color, and color is what makes the photo really special: family photos were rarely taken in color before 1990 in my country.

It might be weird to say, but this photo is very mine, in the sense of talking to me and very few other people. I snapped it from another family’s photoalbum (that’s why the lower right corner) with a digital camera, but it’s still mine. Rumors have it that my grandfather was not a very kind person, being an alcoholic and all. But the photo is very mine anyway.

Except that – you might have guessed it from the watermarks in the lower corners – it’s not it. What I showed to you above is the color photo of my grandfather, put in grayscale (as below) and re-colorized with the freely available tool by MyHeritage. 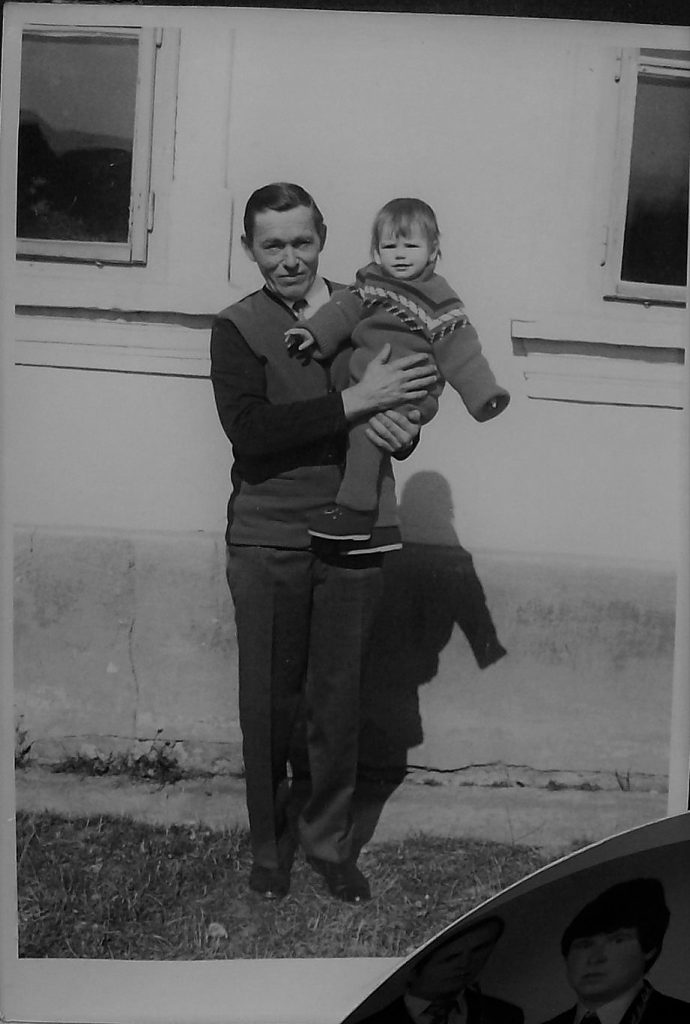 Before we discuss the result, let me take a step back and show you another photograph. 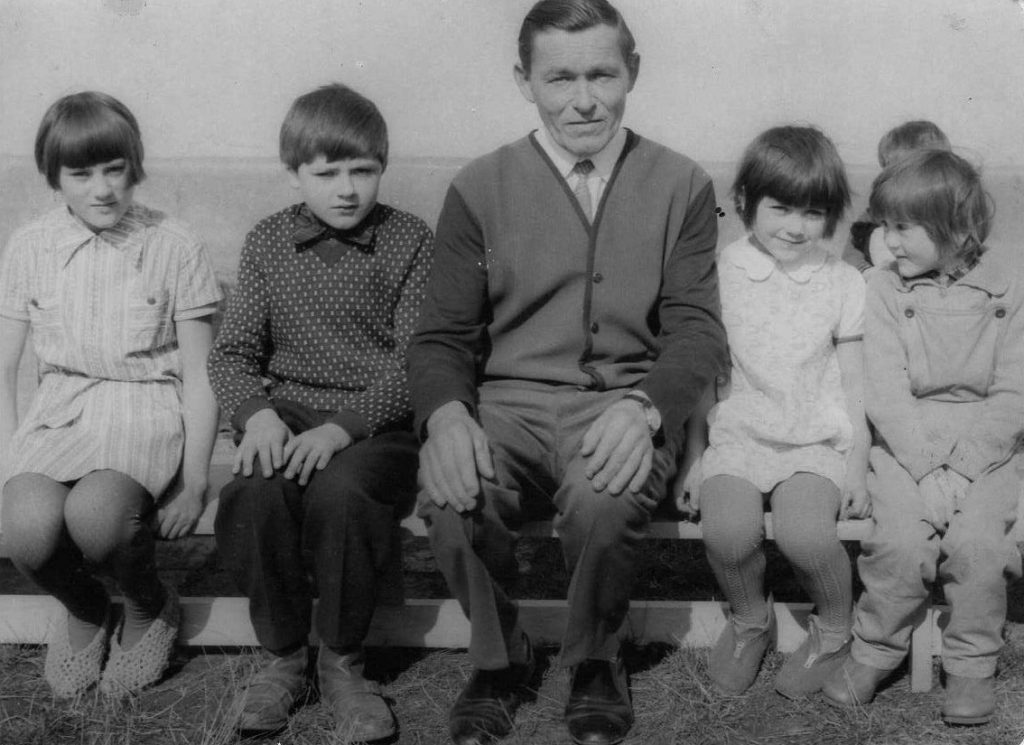 This is a different photo of my grandfather, obviously from the same photographic session, but a photo which I only have in black and white. It’s not as exclusive as the two existing color photos, but is significantly “mine” too, and not in the least deficient by not being in color. It is telling on its own, and the knowledge of the color photos is actually the only reason I don’t take the black-and-white character for completely natural in such a ±1970 picture.

So, what’s wrong with the colorized photo at the beginning of this post? Compared to the grayscale version, it’s a lively, impressive view, a re-animated image of someone long dead and never met. And how this tempting illusion could be prepared for me in a few seconds is a technical miracle, too.

Anyway, here are some reasons you may consider for saying “no, thanks” to the technology.

First of all, when the black-and-white photo is artificially rendered in color, it in a sense stops being “mine”. Now it’s no more an intimate remnant of my family’s past, not talking to and not affected by anyone outside. The color is a product of generic machine learning, built at a random location of the world (as long as locations still make sense in the age of cloud computing). It’s both a dull mean and a random choice based on millions of photographs previously processed. The process provides the photo with shallow attractiveness for practically anyone and kills the authentic (which in black-and-white photographs consists also in the lack of what we would love to see as color). It kills what is there just for me.

But perhaps you don’t buy this mythology of “mine”, of Roland Barthes’ “punctum”, the sharp point with which some photographs attack no one but me (see his book Camera lucida). So let’s get more down-to-earth and proceed with what may seem obvious.

The colorization of an old grayscale photograph is not some magic reconstruction of color but, rather, imputation of information that was originally not there. Grayscale representation is simply one in which certain shades of, say, green appear identical with certain shades of orange, or blue, or gray. In the classical black-and-white photography (based on photosensitive halides of silver), there is no underlying information to tell these hues apart after the photo is shot. Thus, colorization is necessarily a guess (nowadays by artificial intelligence) relying on what colors objects usually have. Sometimes it’s a fair estimate and sometimes a very random one. Green foliage and the tan of European skin is relatively easy to guess (but still a pure guess as to the exact shade), the color of hair is harder and most artificial objects are an outright dice roll.

It’s true that these tools do not claim to reconstruct color faithfully. Nonetheless, their products will be used as such. They will spoil our taste and appreciation for black-and-white photos. Urging us to share the results with family and friends, as MyHeritage does, means disseminating these photographs which are attractive and corrupted in their authenticity. After a time they, and not the black-and-white originals (albeit digitized), may be the ones that survive. And at that time it will likely be forgotten that they were once colorized artificially, as many of them are technically great by now and hardly recognizable from true color photos. (Thanks for the watermarks, therefore.)

There’s one more thing, rather subtle, even in case you keep the colorized photo just to yourself. It’s possible that what you have once seen in color, you will never be able to see with the same eyes as black-and-white again. Cognitive sciences provide plenty of evidence to the effect that our mind likes to impose onto perception what it already knows. Recall the optical tricks where you, first, could not see where the dino is, and then, could not understand how you previously could not see it.

I’m tempted to bring the Barthesian gesture to perfection and never show you the true photo of my grandfather in color. But that’s not what you – who have made it all the way here – deserve, so here it is. 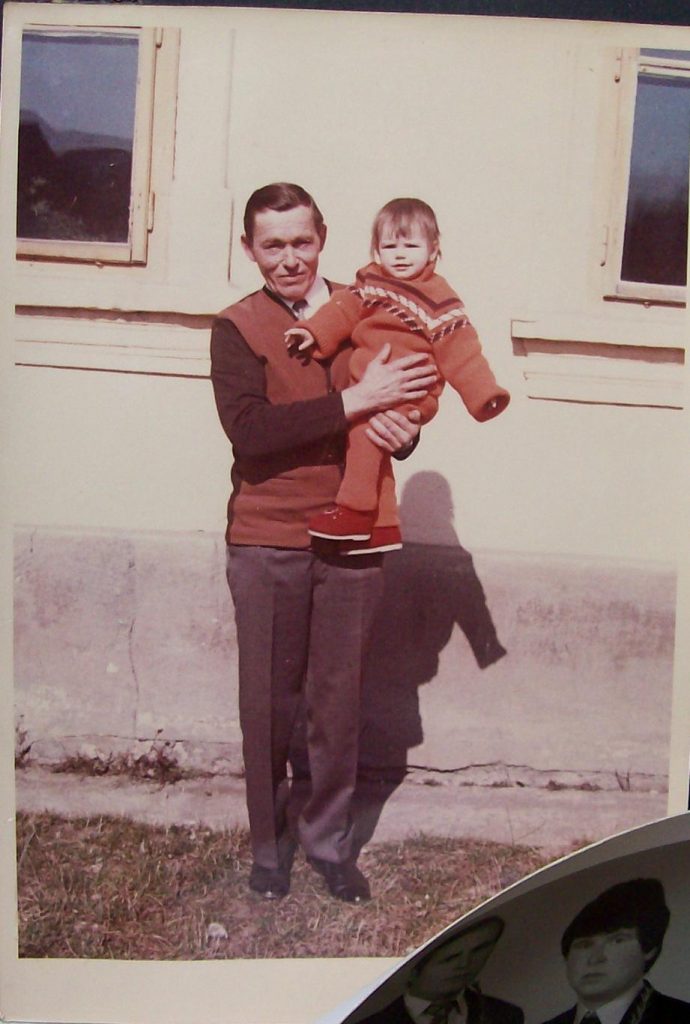 In contrast with the colorized version (see them both side by side below) note that the grass looks way drier and my grandfather’s sweater is as far from violet as the child’s is from pink. Look, also, what the tool has done to the little red shoes. It turned them into dark blue. You needn‘t have read Barthes or Proust to know that, at times, little red shoes really do matter.

P.S. Please don’t read this as a per se anti-technology or anti-machine learning piece. Actually, I would love to see technology help us retrieve old photos long lost, based, e.g., on face recognition. But they should be authentic photos, if at all possible. Also, I am far from absolutizing the colors as mediated by color photographs a couple decades after being taken (inadequate and deteriorated as they may be). But the difference in authenticity between preserving a representation of color and making one up will be clear, I hope.